Central Georgia’s Imereti region is full of unusual attractions. In addition to visiting dinosaur footprints and an abandoned spa town, there are more offbeat and highly worthwhile destinations just east of Kutaisi. In a single day, you can visit the Katskhi Pillar, which is both a geological oddity and ancient religious site, along with the mining town of Chiatura.

Its iconic cable cars may be out of order for the time being, but Chiatura has a few other surprises in store for intrepid explorers.

While it’s possible to get from Kutaisi to Chiatura and back via public transport, the Katskhi Pillar is only accessible by car. That’s why it’s best to hire a private driver for the day, which can be done for as little as 100 GEL. Check down below for more details.

Ever since seeing a picture of the Katskhi Pillar, I knew I’d have to visit at some point before leaving Georgia. And now having done it, I can say that it’s worth the effort to see the unique monolith with your own eyes. But before planning a visit, there are a few things you should know.

The church at the top of the pillar is not accessible to the public. Your visit will basically consist of stopping at a few viewpoints along the way and then looking at the pillar from the bottom.

While there’s a church and some other structures at the base, there’s not much else to do or see. All in all, you’re unlikely to spend more than 30 minutes or so in the area.

With that being said, the Katskhi Pillar is just as impressive in person as it is in photographs. And its fascinating history makes a visit all the more interesting.

The pillar itself is a natural limestone formation which stands at 40 m high. It’s rather similar to the sandstone pillars of Zhangjiajie, China, except this one has no neighbors.

As is the case with many Christian sites in Georgia, the Katskhi Pillar was likely a center of cult worship in pagan times. Centuries later, it reminded Christian hermits of St. Simeon, the Syriac ascetic who lived for nearly four decades atop a carved stone pillar. According to archaeological evidence, Christian monks have lived atop the monolith since at least the 9th century. The practice continued for hundreds of years but then ceased at some point. It wasn’t until the 1990s that ascetics started living there again. A monk named Maxime Qavtaradze spent years living atop the pillar, even helping reconstruct the church there. (He did, however, come down once every couple of weeks.) Sadly, his body was discovered in 2014 and his grave now rests at the pillar’s base.

Today, nobody lives at the top full time, but a group of monks do inhabit the monastery down below. And they make regular trips to the top of the Katskhi Pillar for prayer and contemplation. 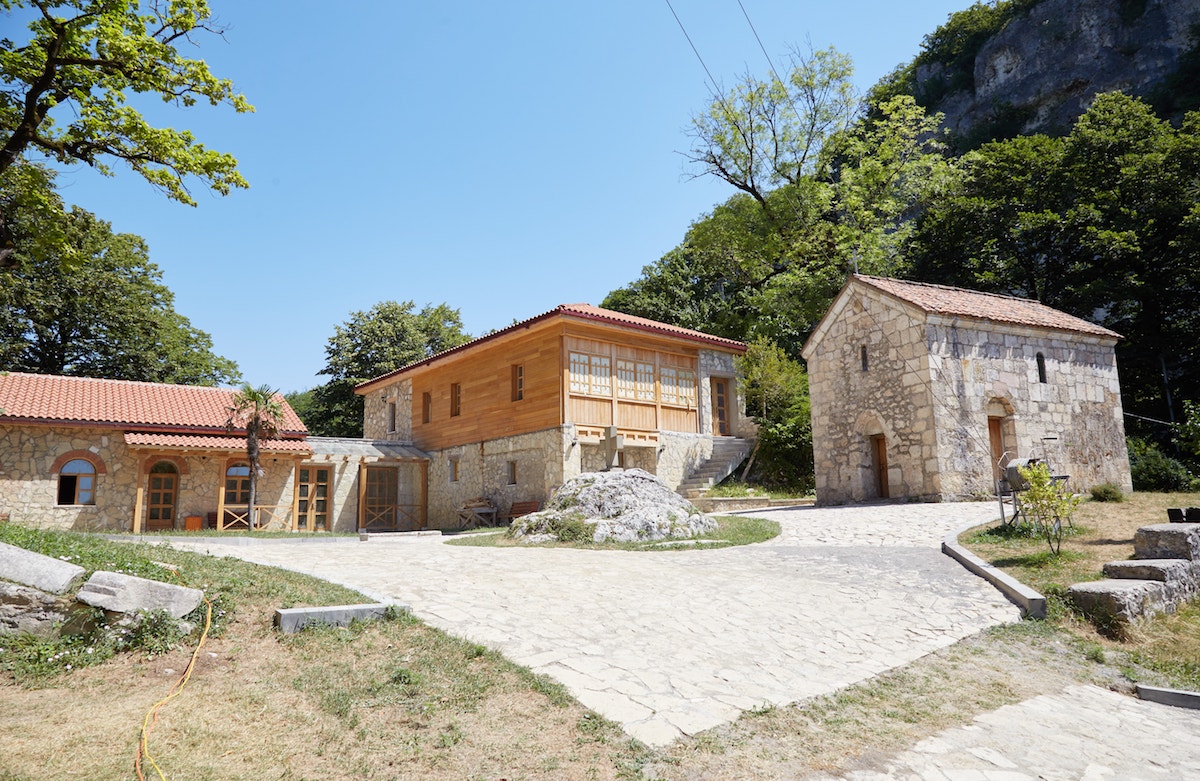 During your visit, you’re free to walk around the monastery at the bottom. Aside from the church, you’ll notice a type of pulley device that makes it possible to deliver food (or whatever else) to the top.

While only monks are currently allowed, a climb up the steep ladder is said to take as long as 20 minutes.

The Cable Cars of Chiatura

The mining town of Chiatura, around 11 km east of the Katskhi Pillar, is quickly becoming one of Georgia’s most popular offbeat destinations. Or at least it was. While Chiatura’s main highlight was riding up and down its rickety old cable cars, all activity has been halted indefinitely as of 2020.

Local officials are working on a brand new cableway system to replace the old one. But until it’s complete, the whole system is out of action, with the old cars stuck hovering in place over town. The Chiatura region is home to one of the world’s richest manganese deposits. And the cable cars, first commissioned in the 1950s, have provided access to the various mines in the area’s cliffs.

But in this town of 30,000 people, even families not working in the mines have relied on the cable cars to reach their homes at the upper levels. So what are they doing now?

While the upper part of town is accessible by road, it’s not an easy journey. So residents have to endure frequent food and supply shortages until the new system is ready. While I was aware that the cable cars were out of action before my visit, I was still hoping to check out the old Soviet-era stations. To my dismay, the main one in the center of town was locked shut.

But it turns out there are many more. As we were driving around town, we spotted another one that seemed to be unlocked. I popped inside to admire the rusty conductor’s box and an old timetable. The place has probably looked the same for several decades.

So even without being able to ride the cable cars, is Chiatura still worth a visit? Thankfully, the town has two other lesser-known but fascinating landmarks to make the answer to that question a definite yes.

In a country with as many monasteries and churches as Georgia, it takes a lot for one of them to stand out. But that’s the case with Chiatura’s Mghvimevi Monastery, built right in the middle of a natural cave.

Founded back in the 13th century, Mghvimevi Monastery remains an active nunnery to this day. Despite being correctly marked on Google Maps, the entrance to the monastery is difficult to find. There are no signs for it, but look out for a nondescript staircase just next to a small corner store on the main road.

It’s a fairly steep climb up the steps, and before long you’ll encounter the entrance to a sizable but undecorated cave. Keep walking ahead and you’ll arrive at another cave entrance which leads to the monastery. Stepping inside a dark cavern, you’ll notice the candles and ikons you’d find at a typical Orthodox church. But here the art hangs on the rough and damp walls of a cave. It quite reminded me of some of the cave temples I’d visited in Asia. As if the atmosphere couldn’t get more spooky, there’s even a compartment in the cave wall filled with human bones! Zero context is provided as to whom they once belonged. Stepping toward the light, you’ll encounter two stone structures built just beneath the cavern entrance. The larger of the two is the Nativity of the Mother of God which is accordingly filled with ikons of Mary. Observe the ornate carvings on the outside of both structures – especially the wooden door of the small church dedicated to St. Catherine. And be sure to look up to spot the ram’s head. And there’s yet one more peculiar landmark awaiting visitors to Chiatura. Up a windy road, all way at the top of Chiatura’s cliffs, is an abandoned theater which was once called Pioneers Palace.

In the former Soviet Union, youth centers known as Pioneers Palaces were set up to help children develop acting, performance and other creative work. And of course, political indoctrination was also a major staple of these programs. This particular theater was clearly designed to mimic an ancient Greco-Roman amphitheater. And the stunning view from the clifftop further reminds visitors of visiting ancient Greek ruins.

But this concrete structure was only built in the 20th century. Somehow, it’s in a much sorrier state than most Greek theaters built over 2,000 years ago. Stepping inside, you can find some crumbling staircases and not much else. The theater seems to be deteriorating rapidly, as even pictures from 2015 almost look like a different venue.

There are rumors that the Georgian government plans to invest a lot of money to restore the structure in the near future. But while I may be no expert, the theater seemed beyond salvageable during my visit in the summer of 2020. Not far away from the Pioneers Palace is the brand new cable car station that has yet to be put in use. With that in mind, it’s likely they’ll do something with the space up here. Whether the theater is refurbished or entirely demolished within the next few years, the trip up here will at least remain worth it for the views. How to Get to the Katskhi Pilar & Chiatura

The nearest large city to the Katskhi Pillar and Chiatura is Kutaisi. Chiatura can be reached by public transport from Kutaisi (as well as Tbilisi), but Katskhi Pillar cannot.

I decided to hire a private driver through the web site GoTrip. On the web site, you can choose your route and then see a list of available drivers. Each driver has their own set price, but they’re mostly pretty similar.

I went with a top-rated driver named Giorgi and paid around 100 GEL, or $30. Everything went smoothly and I’d definitely recommend the driver, who was both friendly and fluent in English.

While I wanted to be dropped off at the nearest bus stop for Tbilisi, the price would not have changed had I returned with him all the way back to Kutaisi.

But if you’re returning to your hotel in Kutaisi the same evening, you can try getting to Chiatura by marshrutka and hire a roundtrip taxi from there to the pillar. However, if you can’t negotiate a good price with a local taxi driver, your total journey could potentially cost nearly as much as what you’d pay on GoTrip.

You can take a direct bus to Chiatura from Kutaisi’s main bus terminal. They leave about once per hour up until 17:00 and cost around 6 GEL. (See the schedule here).

If you want to head onward to Tbilisi from Chiatura, you may first have to go to the nearby city of Zestafoni. While direct Chiatura-Tbilisi buses supposedly exist, my driver thought it would be best to drop me off in Zestafoni, as it’s a larger and much better-connected transport hub. Sure enough, a Tbilisi-bound bus was leaving just as we arrived.

How to Get to Kutaisi

Kutaisi was chosen by budget airlines like Wizz Air to be Georgia’s main hotspot for European budget airlines. As such, many travelers from the EU start their Georgia trip in the city. Personally, I think Kutaisi makes for a better first impression of the country than overcrowded Tbilisi.

For those coming from elsewhere, you can easily find marshrutkas to Kutaisi at all times of day, as it’s one of the tiny nation’s prominent cities. I just showed up at Tbilisi’s Didube Bus Terminal and within a minute, I found a minivan that was just about to depart.

From Tbilisi, the journey is supposed to take around 3 hours. But mine took 4 due to the needlessly long breaks we took at rest areas.

From Batumi, the journey by marshrutka is just about 2 hours. Kutaisi is also connected to both Tbilisi and Batumi by rail. But with minivans leaving so frequently, they’re surely the more convenient option.

Where to Stay in Kutaisi

The city of Kutaisi has two main areas: the very central area around the Colchis Fountain and Kutaisi Park, and the quieter hilly area just across the Rioni River to the west. The two districts are pretty easily walkable from one another, so I chose to stay in the western part of town.

My booking was for Guest House TasuNia, but the same family also owns Hotel Argo Palace just next door. Being one of the only guests there due to the coronavirus pandemic, they kindly offered me a larger single room at Argo Palace for just a small extra fee.

Breakfast wasn’t included, but it cost around 10 GEL for a huge amount of food. (I’m not a big fan of Georgian food in general, but it sure is filling.)

It’s also worth noting that this hotel and general area is a very easy walk to the buses that leave for Tskaltubo just by the Red Bridge.